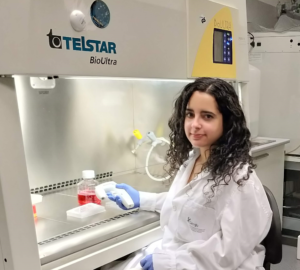 Class-1 Long INterspersed Elements (LINE-1s or L1s) are abundant human active retrotransposons (comprise >17% of our genome) that move using a copy-and-paste mechanism, generating new insertions during early human embryogenesis which can sporadically result in the generation of new genetic disorders. Previous research from Garcia-Perez lab demonstrated that new LINE-1 insertions in Pluripotent Cells (PCs) are silenced epigenetically shortly after/during insertion, using a novel but otherwise completely uncharacterized mechanism. LINE-1 silencing only occurs in PCs, and this restriction mechanism is absent in isogenic Differentiated Cells (DCs). The main goal of Maria’s project in collaboration with the NCDIR is to discover the mechanism of LINE-1 insertion silencing in PCs, as this restriction mechanism may mitigate the mutagenic potential of LINE-1 during evolution and development. As L1s are known to impact the genomes of human embryonic stem cells, with potential in regenerative medicine, understanding how L1 is regulated is important to guarantee their safety for clinical use.

To interrogate the above-described mechanism and identify factors linked to LINE-1 insertion silencing, Maria carried out co-immunoprecipitation studies of the LINE-1 ORF1 protein and its interactors in PCs and DCs from PA-1 cells. For this she worked together with other NCDIR scientists, including Ms. Hua Jiang, Ms. Kelly Molloy, and Dr. Mehrnoosh Oghbaie, to capture LINE-1 ribonucleoprotein particles and conduct mass spectrometry-based protein interaction studies on them. As a result of this work, they identified a list of factors that will be subsequently validated by Maria using CRISPR/Cas9 genome editing and retrotransposition activity assays. During her visit, Maria also worked to develop a ‘capillary western’ (Protein Simple: simple western) assay for the combined detection of ORF1p and ORF2p, the two proteins encoded by LINE-1. Her aim is to easily facilitate future, rapid quantitation of LINE-1 proteins across different samples.

Maria Benitez Guijarro’s visit was funded by an EMBO short-term fellowship and the Fellowship for temporary transfers for FPU from the Spanish Government.